You are here: Home1 / General News2 / Positive outcomes for children through the Story Time Show 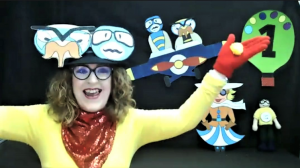 Part one: The story of the Story Time Show… an incredible year.

Once upon a time there was a woman called Gwyn. She was busy running Positive Eye, presenting courses on children with special needs all around the world, when suddenly a pandemic happened bringing everything to a halt. All her courses were cancelled and her diary emptied…overnight. She looked around her room and thought to herself… mmm…I had best do something rather than sit here.

Let’s get to work!

She went to her cupboard and found some card and glittery paper.

She went to Facebook and set up a LIVE event… She found Marvin and dusted him off. One Monday, on the 22nd March… at 4pm she pressed the button and went LIVE on Facebook. Gradually families in isolation, families shielding and facing long days alone found Gwyn and the Story Time Show was born…..

Along with her husband they started to create characters on a conveyor belt of creativity, glitter, paint, card character, glitter paint, card character. Off the end the characters rolled and rolled. New characters, new adventures, new crafts, day in day out from March until the end of August! As the shows developed on Facebook families connected, they waited for 4pm each Monday, Wednesday and Friday watching the clock, looking forward to being cheered up by Gwyn-Gwyn-Gwynnie-Gwyn-Gwyn (her Story Time Show name)

Through the joyful rainbow spins, hellos, songs, rhythm, crafts, a connection continued, a community formed at a most difficult time in the lives of families with children who were vulnerable. Gwyn started to see the difference the show made as parents shared photos and videos of their children’s joy and engagement from watching the show.

Gwyn realised she was on to something good, something which could have an impact on their literacy outcomes. Gwyn wasn’t wrong the outcomes for literacy have been incredible to date and are still happening, even today a Mom shared feedback from the Story Time Show Special Birthday edition that her daughter now knows when it is the end of the show and actually now says THE END!

60 plus shows  were performed by Gwyn-Gwyn-Gwynnie-Gwyn-Gwyn during last year.

Then during conversation Gwyn was having with Donna Carpenter at the Kentucky Deafblind Project an exciting idea emerged…. What about a Story Time Show for the children they supported?

It’s growing and as my good friend Donna said to me yesterday… “Gwyn, the Story Time Show is still in its infancy, it is going to grow and grow and continue to change the world for children.” 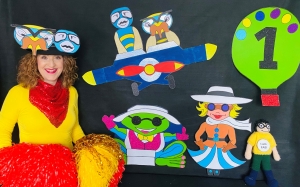 Yesterday I presented a one hour 1st Birthday Special of the Story Time Show,…. it was truly a magical hour. Since the show I have been receiving messages from parents taking part about the outcomes they are seeing taking place both during the show and right afterwards.

I keep saying ‘you have to see it to believe it’ well since yesterday yet again I have seen more videos to give me the evidence that the outcomes are really happening for children with complex needs as a result of the show. One mom said to me:

“He loved it! He even started to clap his hands when you said goodbye to him. Thank you for creating this beautiful story time for our kids!”

I watched a video of this little boy watching the show…. he rested his chin on the laptop and watched….. just watched,…..looked and looked and stayed at the laptop looking and engaging. His mom said to me, he watched for the whole hour he was glued! Then she said to me.. that right after the show her little boy wouldn’t let go of his Marvin doll, he was pretend playing with him ALL DAY, clapping his hands, trying to make him dance and walk, playing with Marvin’s hair and checking his shoes out.

This, she explained to me was a long term goal…. imaginary play… and yesterday it really emerged!

The Story Time Show has demonstrated that with low tech, low cost approaches, underpinned with best teaching practices possible through a screen, that massive outcomes can be achieved for ALL children …..focussing, talking, attending, engaging, vocalising, pretend play, participating in new and different ways.

The Story Time Show model is built.. now it really needs to do its work to reach more children on a regular basis. 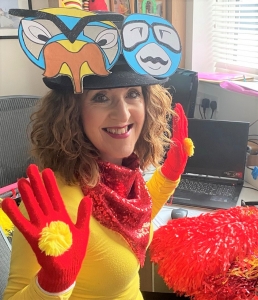 The Positive Impact of the Story Time Show

Listening to the child’s voice
Scroll to top

Because these cookies are strictly necessary to deliver the website, refusing them will have impact how our site functions. You always can block or delete cookies by changing your browser settings and force blocking all cookies on this website. But this will always prompt you to accept/refuse cookies when revisiting our site.